JULY 2012 – Leaving on a long road trip is actually harder than it sounds – and it’s already hard to begin with.

If you think you’re leaving at 10 in the morning, it usually means you’ll actually be on the road by sometime around lunchtime. It means last minute yelling, frantically stuffing objects into your car and working out whether you’ve packed the important things at the bottom… where you can’t reach them until you unpack the whole car.

This is what happened to us.

But, as we waved goodbye to Melbourne as it disappeared, and the last new estates and outer suburbs gave way to pastoral land, the excitement of packing up and leaving everything finally sunk in.

After hurtling through Northwestern Victoria, I finally understand the term ‘blink-and-you’ll-miss-them towns’ – a sign alerts you to a town 10km ahead and, before you suggest ‘Should we stop here?’, you’ve driven through it and now faced with not seeing another one for another 100km.

Aside from a stop for a coffee and a photo of Hungry Azz (a local eatery, not the town fat guy), our drive north to our first stop (Menangatang) was uneventful. 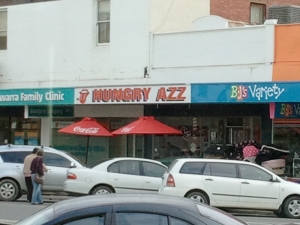 Menangatang, in local’s terms, is around the corner from Swan Hill (it’s actually about 150km away), is a tiny farming town with crops varying from barley to wheat to canola oil.

The truth is, there’s not much out here – crops, fields and crops. But it holds a certain mystic to the city slicker: how could anyone live out here with out sound of cars and sirens?

Cousin Owen (our host and fourth generation ‘tang’ farmer) and his lovely wife Freule fed and watered us after a quick walk around the ‘house-part’ of the property, which would have fit most Melbourne properties three times over.

After a night of wine and family catching up, Owen took us on a tour of the family farm – about 1000 acres of it. My suggestion that Owen try hops as well drew a dry laugh but I don’t think he tool me seriously. Owen even gave a us quick tutorial on how to deal with the rabbit population – some poison in an ‘Afghan melon’ and close the door. Yummy.

Numerous scones, cups of coffee and hearty handshakes later, we were on the road to Meningie South Australia. It wasn’t a long drive (four hours or so) by the time we were welcomed into the southern state with light rain. A few more hours meant we reached Meningie to stay friends Eliza and Matt, and entertained by their kids, Elenore and Evie.